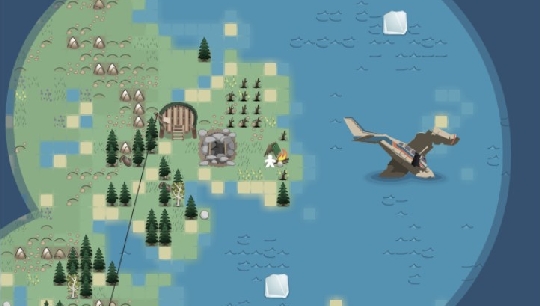 Make No Wonder is an HTML5 web game by Matthew Hollett that was described as Minecraft but without the block-building or mining. That may sound boring at first but it perfectly captures the solitude, exploration, and desperation of Minecraft with a little hint of humanity’s impact on nature without being preachy about it.

As the game loads you awaken as a tiny figure in a top-down world with limited visibility of the 2D alpine landscape around you. With a dwindling energy bar you are given precious little guidance aside from a few blinking dots on an otherwise obscured map. Working your way towards these blips you’ll discover the basics of the game as you bump into trees, bushes and caves. Foraging for supplies like birchbark, wood, and boughs reveals recipes to help you survive and explore. Flint + Wood = Axe. Wood + Boughs + Stones = a campsite to refill your energy. Along with natural (and now depleting, thanks to you) resources you’ll also discover essential gear on this once-inhabited island like string, binoculars and an inventory-expanding backpack.

Given its simple form I was surprised how effectively it made me contemplate every step I took. Every action, every movement depletes your energy and it takes just as much work to replenish it as it does to keep exploring the environment. You don’t have to worry about dying once you run out of energy — it’s not a roguelike — but there sure is a lot of unconscious downtime if you do. I don’t want to say too much about what you find because a lot of the intrigue is left to your imagination. I also don’t want to get too hyperbolic and oversell it so I’ll leave at this: for something that sounded like a sparse Minecraft-alike I’ve already spent hours playing multiple games of Make No Wonder. Though it’s mostly finished there is currently no save system which is practically the only complaint I could possibly lodge against this pleasant game of survival.