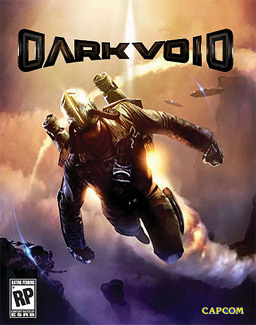 How can I be done with the game before it’s even out? Let’s just say that this is one demo that saved me a ton of money and buyer remorse as I was really ready to jump on this from Day One. Now that I’ve played it I think I’ll just stick to Crimson Skies for cheeky high flying antics. I do love the idea, the Rocketeer-esque look of a guy strapped to a barely-controllable rocket pack voiced by the ever-lovely Nolan North, but all that charm flamed out for me within a few minutes.

The gameplay itself is nice — the jetpack controls just like any other aircraft in an arcade/shooter and the on-foot gunplay is decent — but there’s some overall vibe that just smacks of, well, a decade ago. The graphics aren’t very good, the demo area is tiny and uninteresting and there’s a general lack of detail that makes the whole thing feel flat and boring. I know that’s the same period that Crimson Skies came from and I’m being fairly hypocritical to say I’d rather play that than Dark Void which, at least, has Achievements. It’s just that Dark Void should be so much more advanced and pretty and… fun. Like Brutal Legend, it’s the story and unique world that I’m more interested in and, also like Brutal Legend, I can just picture Dark Void winding up as another cast-aside, unfinished disc of shame. Ok, I’m not swearing it off but it definitely went from Buy to Maybe Rent One Day on my list.

But you don’t have to LeVar my Burton! Check out the demo for yourself as it’s free and just as readily available for you as it was for me. What’d you think? Back to the Future references enough to warrant a purchase?