We’re just getting into this whole user-created content thing with titles like LittleBigPlanet and Spore so there’s bound to be a few surprises along the way. Blast Works: Build, Trade, Destroy — one of the first efforts and a generally overlooked release — sure surprised me with a user-created conflict of interest. While I’m all for homemade content, what am I supposed to do if I just don’t like the gameplay? Let me explain the basics first.

Like most other shooters you’re piloting a ship and forging through a deluge of enemies across an array of colorful and stylized worlds. The catch is that every enemy you shoot down can be caught and attached to your craft, giving you additional firepower and a layer of makeshift armor. It’s sorta like Katamari Damacy and R-Type mashed together. It’s funny at first and you can just start to see a strategic element building but it falls short. 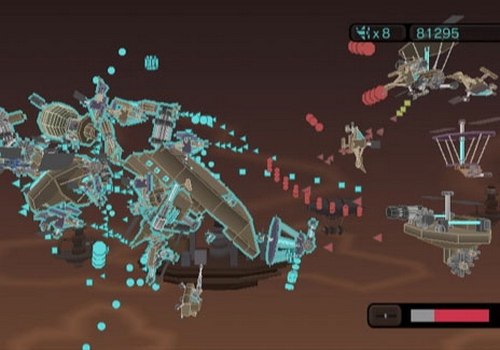 As your airborne glob takes damage the junk you’ve collected starts flying off, spinning wildly and mingling on screen with identical ships that are attacking you. It becomes impossible to differentiate what you can and can’t grab hold of and when you do manage to snatch something it’s usually pointing in a useless direction, sending powerful attacks screaming right off the screen. The only other button in use allows you to suck in all the junk you’ve picked up to keep it from being blasted off, leaving you a slow-moving, underpowered target unable to pick up any more stuff. That’s as deep as the gameplay goes.

After a handful of stock Arcade stages with uninspired attack patterns and lame end bosses I thought maybe I was missing out on something. After all, the game’s tagline is “Build, Trade, Destroy” and I’d effectively jumped right to the Destroying part. It’d be like loading up LittleBigPlanet and totally ignoring the ability to create stuff. So I back tracked to the main menu and loaded up the Editor which somehow managed to be an even bigger disappointment than the game I’d already played through.

I won’t even try to explain it but I will point out how impossibly hard it is to create anything after pointing your arm at the screen for a few minutes. Fine tuning polygon placement with the Wii Remote was a tiring ordeal in MySims and it’s no easier here in Blast Works. You can use the D-pad and Nunchuk for traditional control but the interface itself turned me off all the same. Rest assured that should you decide to climb the Editor’s staggering learning curve you’ll need all the tutorial instructions you can get. These are conveniently located outside of the game, on your computer, on the internet, in PDF format. 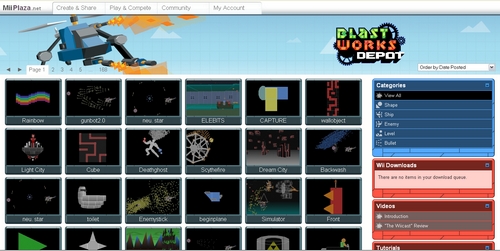 Unable to create an online component through the Wii itself, Majesco has chosen to support the game’s community via BlastWorksDepot.com. Through an impressive Web 2.0 interface you can browse a huge library of user-created stages and ships, rate and comment on them, meet and greet other players, and queue content up for download. Then it’s back to the Wii for the actual download into the game and onto the console’s limited internal memory. It’s a disjointed process in this burgeoning age of in-game store fronts, but it works.

Seeing the latest creations come streaming in and perusing the huge catalog of content has been a revelation to me in more ways than one. First, this game that I really don’t like has a dedicated group of fans crafting content and uploading it on a daily basis months after the initial release. And second, it’s made me realize that user-created content can only go so far. The day will probably come when consumers have the tools to create an entire game of their own from scratch, but until then there has to be a defined core to build off of.

Just as there is no way to turn LittleBigPlanet into an MMORPG, there’s no way to extend Blast Works beyond its basic and gimmicky shooter gameplay. All the homemade bikini-girl ships and video game cameos can do nothing but change the look of a game that I already don’t care for. I do, however, respect Majesco’s work at building a community and those who have populated it with their own artistic creations. For this, Blast Works gets a recommendation. Everyone should at least try it, because if you do enjoy the gameplay there’s an immense community of like-minded gamers to meet and a chance to bring your own visions to life. Surely that makes Blast Works: Build, Trade, Destroy worth its rental price.