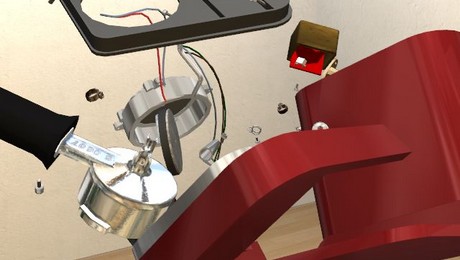 There’s something appealing to me about interacting with real world objects in a virtual space beyond the typical violent interactions of most games. I’m a big fan of Secret Exit’s Zen Bound series in which you attain enlightenment by wrapping rope around wooden blocks. Disassembly 3D scratches that same itch for me only the enlightenment and reward comes from taking apart consumer electronics.

There are loads of similar apps on iOS to replicate the field stripping of guns but it’s the more mundane nature of Disassembly’s objects that grabbed me. For free you can disassemble a dresser, a desk lamp, and a speaker with paid unlocks for objects ranging from desk chairs to bicycles all the way up to a house. Pinching to zoom and swiping around to move the camera you’ll remove screws and switches, pull things apart and toss them around the room, and watch them animate. There isn’t a lot to see in the free objects but on the more advanced stuff you can simply watch doors and levers operate, mess with the fluid physics of a shower head, figure out the combination to a safe and poke at the gears and pedals of a bike.

Completing each “stage” unlocks bomb mode that lets you explode the object at will the next time you load it up. I derived an immense sense of satisfaction from gently opening the dresser drawer, putting a lit bomb inside, closing it and watching the thing disassemble itself in slow motion. I then derived that same sense of satisfaction four or five more times in a row.

Manipulating the camera is a little finicky at times and I had to zoom way, WAY in to get some of the parts out but for free it presents a fun and unique experience for anyone who likes to play with real-time physics or putting furniture together. I enjoy both so maybe I got more out of Disassembly 3D than most will but I still say it’s worth checking out if you’ve got an iDevice.