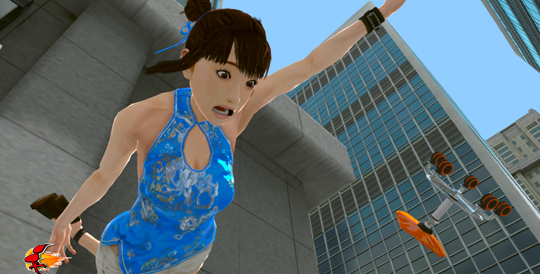 Yup, that about sums it up

Even at the height of my Achievement hunting madness I was never terribly determined to “get them all” on any one game. It was cool if I could but usually there’s at least one multiplayer or time trial type Achievement that I know I’ll just never get. So it surprised even me that I’ve been so determined to “S Rank” Kung Fu Rider on PlayStation 3. There’s also something to be said about 100% completing a motion controlled game. More than quick witted thumb work, this took actual physical dexterity and endurance; it’s kind of a sloppy game to play and one that can quickly wear out your waggle arm. Looking at Raptr and Giant Bomb data it’s one that a lot of people have clearly given up on — so, yeah — I’m pretty proud of myself.

Mostly it was the CHAIRMASTER and MEDAL COLLECTOR trophies that I was afraid I’d never see. According to Raptr less than one half of one percent of players have ever gotten them to date. That’s the territory I usually never have the stamina, dedication or attention span to make it into. As flaky as the controls can be the game makes no consolations when it comes to scoring. Getting an S Rank on every stage requires a nearly flawless run and a high combo. The game is constantly throwing things at you to knock you off your seat but as I’ve played I’ve come to anticipate, improvise and overcome. After so many games that call it ‘close enough’ and let you pass it felt good to be challenged again, physically and mentally.

It also felt good (for the most part) to go easter egg hunting in a big open environment again. I haven’t seriously undertaken that task since Crackdown 2, only Kung Fu Rider doesn’t want you to find its hidden tchotchkes. There’s no rumbling tone when you get near one and there’s not much distinction between them and the hundreds of other colorful, spinning things around the city. Tracking down all 120 medals helped me get those S Rank scores, too, as I found new paths through the city I’d never taken the time to explore before. It was getting pretty maddening once I got down to the last two or three medals. Rounding a corner on a rooftop I swore I’d already explored and seeing the final medal felt glorious.

A few seconds later and I got my final *g’ling* and was done with the game but, wait, there are other people out there who can’t find all the medals. Surprisingly, there’s not a single walkthrough, map, or YouTube video on the entire internet with the answers. Hmmm, that’s a niche that’s right up my alley. Maybe I’m not quite done with Kung Fu Rider afterall…