PONCHO is one of those ultra-mysterious indie games I first latched onto at the Independent Games Festival back in January. Tantalizing as it was, the problem with falling for an indie game early on is never knowing exactly what you’re going to get. I assumed the preview build I played was only a taste of an expansive, fleshed out world but it turned out to be the whole thing, sans a little polish. I’d hoped for much more time for the gameplay and story to “breathe” but find myself a little deflated and yearning for more. Still, I’d rather take my chances on something new and unfamiliar than just another action game with level grinding tacked on. That’s where PONCHO excels, with its wonderful pixelart visuals and parallax effects, nonexistent combat, existential hints of a bigger story, and of course, its signature gameplay mechanic.

I still think the intro makes for both a great tutorial and a stunning setup, one I don’t want to spoil with any more details. Suffice to say, once the dust settles you wake up into a post-human world of self-sustaining robots as the titular poncho-clad automaton. Poncho’s only motivation is to find out what happened to the mysterious Maker whose final words echo through that opening scene. To do so means exploring 9 stages that scroll both left and right and are packed with puzzles and secret pickups. This is the “open world” that the game advertises, allowing you to return and explore any stage once you find the exit. 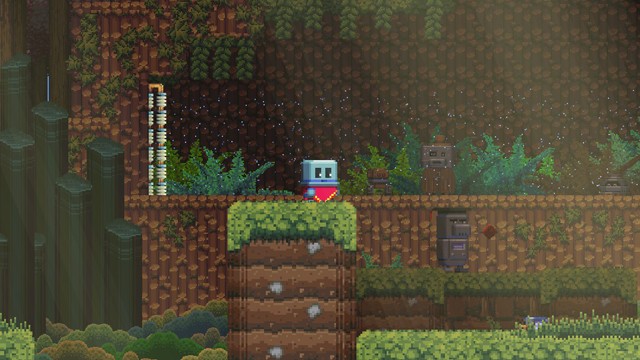 For reasons unexplained, Poncho can instantly swap between Z planes — background, middleground and foreground — at the touch of a button. This lets the designers build platforming puzzles that tweak your spatial awareness in ways I’ve not experienced in a “2D” game before. Yes, not even in Fez; PONCHO has a dimension-jumping feel all its own. All you need is clear line of sight and you can jump forward and back as the three planes ripple in and out. It remains a satisfying and mesmerizing feeling as the pixelized world whips in and out of sight, changing scale and transparency as you leap around. There’s even a subtle distortion to the music when you move behind foreground objects.

From the moment it opens the whole experience is made into something bigger than the sum of its parts thanks to Jack Odell’s splendid soundtrack. With a powerful, lo-fi explosion the simple title screen takes on dramatic importance, layered with a melancholy synthwave melody. It’s not always so dramatic but even the lighter pieces have a forlorn vibe with mechanical beats and simple, lonely synths. It culminates in “The Tower”, a powerful, bitcrushed dirge of synth organs that accompanies one of the game’s most daunting sections. 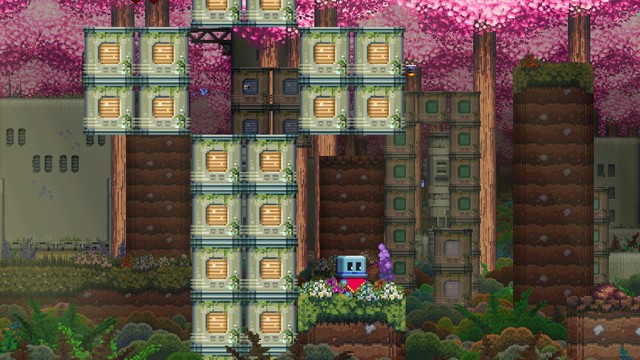 While I absolutely love that PONCHO has no form of combat, the mechanic that introduces the game’s challenge can be quite frustrating. The good ol’ moving platform gets a three dimensional upgrade in PONCHO, moving in and out instead of horizontally or vertically. At first they’re not bad but all too quickly they’re stacked side by side and used to build unexpected and confusing pathways. There are also platforms and barriers that move with you between planes but it always came down to blind luck as to whether, on the tenth try, they moved in the direction I need them to.

There are moments when the moving platforms feel perfectly balanced. They’re used to great effect in the lead up to the final level and really make you feel like a platforming genius. Leaping across gaps while simultaneously transitioning through the layers is a great sensation but these moments are rare. In contrast, in the very next section of the final level — a terrifying climb up The Tower — it’s possible (and very easy) to fall almost all the way to the bottom with a single mis-timed button press. 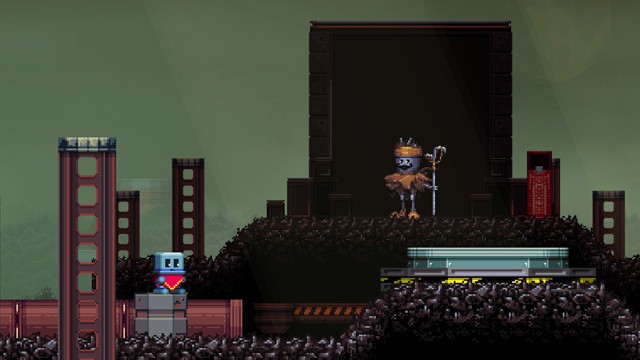 For a game this short it’s disheartening to see so many moments that could have been clever and fun turned frustrating. For me, PONCHO shines the brightest when you’re simply navigating its ruined, reclaimed world and poking your head around its many clever corners. A few more stages of this simpler exploration before the moving platforms take focus would have helped me. Instead, I came to dread the sight of them and it was only thanks to a launch week patch that adjusted their timing that I was finally able to finish the game.

Frustrating as some of the platforming was I was still sad to see there wasn’t more PONCHO to play. The lo-fi music and vibrant, layered, pixel visuals combine to create a world I’d love to hang out in for more than a handful of hours. It’s an experience worth having but there’s not nearly enough of what I loved — and a little too much of the stuff I didn’t — to justify the $15 price.

[PONCHO is developed by Delve Interactive and published by Rising Star Games. At launch it is available on Steam and PlayStation 4 for $14.99.]