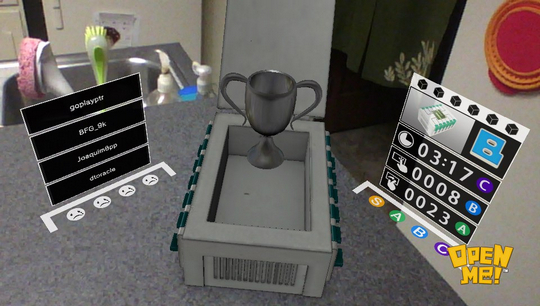 The concept of Augmented Reality games always grabs me but seeing sharp 3D visuals overlaid on grainy, laggy camera feeds usually proves too jarring to be fun. Open Me! has had to fight those expectations as well as coming out of the PlayStation C.A.M.P. program whose past efforts disappointed me. Knowing this going in I tried to ease that expectant sting by grabbing the game on sale and promising to play just a little bit at a time. It worked, and I’ve come out the other side wishing there were more boxes to open and more people who gave this game a chance.

AR comes with a lot of caveats before you even get to the game itself. The Vita’s camera just isn’t that good and you have to search for your own personal space for it to work well. Having played through it I picture the ideal location as a bright, empty art gallery with the AR card attached to a black, waist-high pedestal. My best bet was our chest-high kitchen counter under a heavy fluorescent light. The brightness kept the lag at bay but the glare on the glazed surface frequently made the Vita lose track of the card. The kitchen also made it hard to get all the way around the boxes and there were plenty of times I was leaning over the sink or past the drying rack to find a crucial, hidden clue.

But again, Open Me’s charms won out. Presented with only a screen or two of explanation you’re flung at 51 puzzle cubes and expected to figure them out on your own. A sense of exploration and experimentation will do you well here as you poke and swipe while skittering around; one hand holding the Vita, the other scratching your head. Here’s a hot tip from me: sometimes you just need to move on. By figuring out other boxes — some are tricky while others require more logical thinking — you will come to discover things that will help you progress. The Vita, it turns out, can track way more than just two fingers. 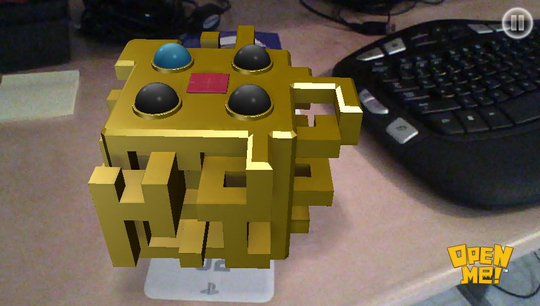 It’s one of those games where you don’t want to say too much because the fun is in discovering the solution, but I’ll go ahead and spoil a few of my favorites. The Super Stealth Box is covered in spikes that are tough to discern from the one random button as the whole thing is Predator-style transparent. I ended up moving a pair of cards that were sitting on the counter in and out of view, looking at the distortion until I spotted the smooth, curved button. The Surveillance Box is equipped with a motion tracking camera that won’t let you sneak behind it to pull the shiny handle. I tried to figure it out for ten minutes when, in frustration, I smashed my fat thumb over the stupid camera and… oh come on, I can’t believe that was the solution! Late in the game there’s a fantastically complex washing machine that needs three cycles run just to find the owner’s manual.

Opening a few boxes each day and taking a break when I got to the really fiendish ones, I’d say I had a few weeks of fun with Open Me!. There are multiplayer boxes to open and a system to design and send puzzles to friends but both require knowing someone (in real life) who owns a Vita and the game. Needless to say, I didn’t get to try out either mode. You can get a feel for the game in the free version and buy individual packs for $0.99 but if you’ve read this far and are still intrigued you should buy the Full Game. It’s not as mysterious and chic as The Room but Open Me! has just as many ah-ha moments of rewarding discovery. It’s got that quirky design sensibility you only get from the Japanese on top of the (tolerably janky) novelty of using your AR cards again. 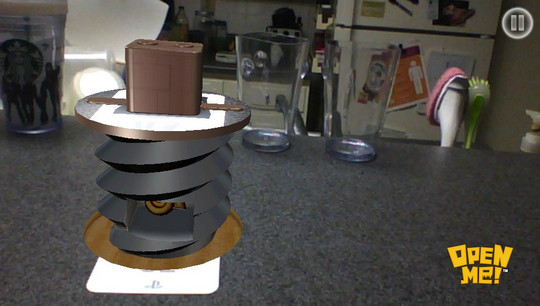