This is the second in my series of reminiscing on Marvel games of the past and present, and this time I present to you a game from 1991 and a title featuring heroes who have in recent years become the flagship of the public’s Marvel consciousness: Captain America and the Avengers! 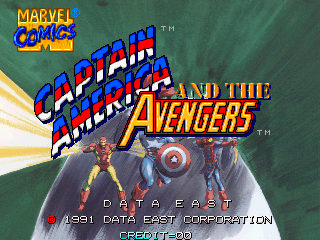 As the 16-bit generation and the power of comic book licenses started to kick into full gear, Japanese arcade game publisher Data East released Captain America and the Avengers in the arcades. At that point, the Avengers were not a household name with an all-star line-up; Iron Man was B-list, Hawkeye was well lower on the totem pole, and who the heck was Vision? In fact, it was just as likely that as many people associated the Avengers with the British TV series (which spawned a notoriously awful film) than the comic books, or just as likely that neither one was in anyone’s mind. They needed a headliner, and fortunately, Captain America was the perfect candidate.

Firstly, the background visuals are outstanding. Even to this day, the lush pastel and incredible detail is something special to behold. The characters maybe don’t live up to the same standard as the backgrounds, but they do have a kind of look to them which feels particularly anime and that, in my opinion, is actually kind of cool for its time. 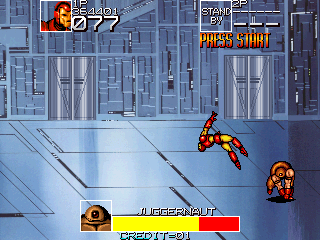 Hey, Juggernaut, why are you wearing the Gem of Cyttorak on your face? Why are you even in this game? Ooof!

It also mixes it up by placing a few horizontal shooting scenes in between the action fighting core. While you can’t expect an R-Type or a Thunder Force IV here, it’s nice to break the monotony and the only couple of times you will see Wasp in the game. 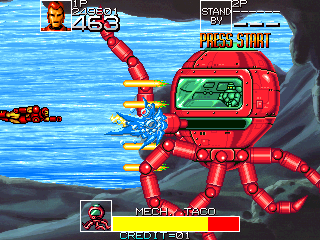 As a kid, I did not know that the word “tako” meant “octopus” in Japanese. Neither did the translators, it seems. So, we all were puzzled why they called it a Mech. Taco.

There are more than a couple of problems in the whole of the game though. The control isn’t really that good; hits don’t connect, certain attacks come at random, and the power attack is a two button press that doesn’t need to be. This also extends to the shooting part of the game, which is much more forgiving but nonetheless less than stellar.

The game is also brutally difficult. The characters lose health like crazy, and Quicksilver only shows up every once in a great while to throw a health pickup and even then it’s not enough. The way to expand your energy most effectively is also the most awful: you pump in more quarters. Now, keep in mind, this was in the era where machines were mostly 25 cents a play, although 50 cent machines did exist, but it was still the perfect way for an arcade owner to pick clean a kid’s weekly allowance. It’s not robbery, more like gambling where the only thing you win is the satisfaction of punching in the Red Skull’s teeth. Still, the combination of the health system and the difficulty made it far more of a candidate of console conversion than not. 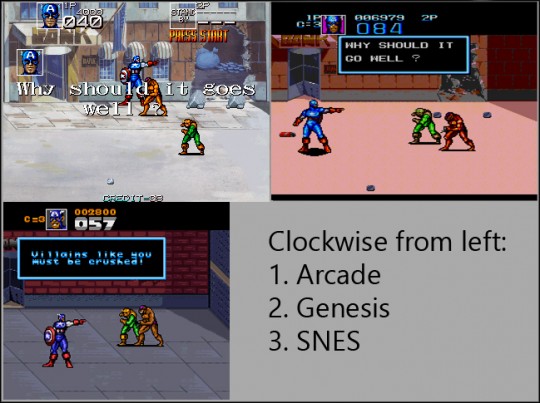 A visual comparison of the three versions, arcade, Genesis, and SNES. Porting to consoles? Why should it goes well?

Unfortunately, the console conversions do not do this game justice, for one reason or another. The SNES version was completely outsourced; Mindscape, the developer of that version, had to build the game from the ground up. The only thing that remained were the voice samples. Everything else was redrawn, or even re-written. The visuals as a result take a big hit, and the control of the game isn’t so great, although they managed to add a third action button for the power attacks.

Despite the arcade version’s flaws, it ended up being a fun game to play with friends, even if you ended up having to pump five dollars worth of quarters into it in order to get much anywhere. It doesn’t hold up these days to the games that have come after it, but at the time, it was a good time to be had if you really, really wanted to play as an Avenger. And believe me, I did.