Promo Man: The Plot Thickens when Castlevania comes to Genesis

One of the sore points as a Sega fan was missing out on Castlevania. Seeing Simon Belmont brandish his floppy whip and jump across huge swinging sprites in Super Castlevania IV always made me jealous.

But finally, in 1994, the series came to the Genesis and it was — oh, what is this!? It’s not even a Belmont? Some French guy? This… doesn’t look as fabulous as Castlevania IV or Dracula X. 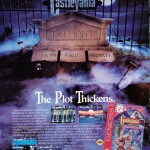 In the end it turned out to be a great Castlevania with amazing graphics in its own right, if a big departure from previous games. And one of the things that cemented my faith was this magazine ad. The “plot” thickens, get it? I remember finding it incredibly clever as a teenager while  appreciating the artistry in the little hand built diorama. Nevermind that Eric and John aren’t Belmonts.