Fighting games were hot-hot-hot in the 90’s and Kaneko couldn’t wait to spread the word on their debut entry in the genre. This ad for Deadly Moves ran in 1992 and was seemingly based on a loose translation of the design document and some concept art. 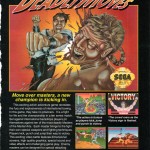 I’m pretty sure we used to make a bowel movement joke about this one.

Taken on its own, the text could be describing any fighting game with phrases like “set against international backdrops” and “players kick, punch and jump their way to victory”. I especially love it being described as a “video battle” and the mock-up screenshots complete with a footnote.

I can’t fault the writer for the bits about 3-D and dimensional screens; there are some great parallax effects in the final game and the meaning was probably lost in translation. Or it was just an ad man trying to overhype a 2D fighter.