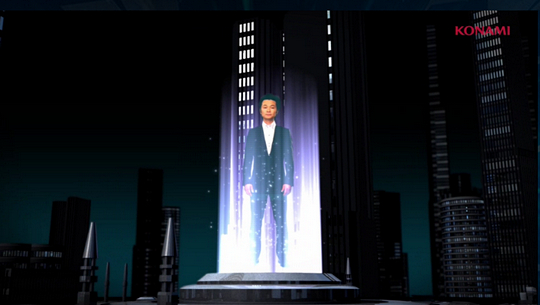 I didn’t stay up late last night to watch Konami’s Pre-E3 show “live” but having just sat through the stream I can tell you that even the shallow, toss-and-turny sleep I got in its place was more enjoyable. I thought the rooftop introduction from cyberCEO Tomoyuki Tsuboi was going to set up a great show of awkward green screen CG but after his hologram fades out it’s mostly cut and dry live action press releases.

Konami has opened a mobile/social office in San Francisco to make Facebook games and team up with Zynga. There’s a lot of Frogger on Facebook and while Frogger Pinball looked mildly interesting it was counterbalanced by the big, hot news of “Frogger Classic” being available on the Chrome Web Store… since January.  Then we moved on to Pro Evolution Soccer news.

Finally Hideo Kojima showed up to narrate the majority of the show as he talked about Zone of the Enders HD Collection, Metal Gear’s 25th anniversary and a handful of Metal Gear HD collections that are already out. This all served as a segued into the first in-game look at the new Metal Gear Rising: Revengeance.

If you were sad about how poorly Ninja Gaiden 3 turned out you can rest assured it was all PlatinumGames’ fault. From the looks of Revengeance they have sucked Hayabusa’s soul out of Tecmo’s hands and cybernetically installed it into Raiden. Or think of it as Bayonetta with a dude… a girly dude. C’mon, he’s still pretty girly looking even with the robo-jaw. The action looks great and fast and Raiden can even wield weapons other than his katana. A staff is shown whirlwinding its way through enemies and at one point he unleashes an RPG on a tank. Not very electro-ninja of him but you can’t simply cut everything into pieces all the time. That trademark slow-mo chopping looks as satisfying as ever too, I just hope they aren’t too stingy on when and where you can use it. The trailer proudly declares “early 2013” but I wouldn’t be surprised if it slips into “Summer 2013” territory before it’s finally out.

Mega 64 makes their return this year feeling very vestigial. There’s no Transfarring madness tied into their appearance, just a mildly funny series of Raiden gags and a great appearance by Jehuty. It’s like they’re only there because they were there last year. And then the show is closed out by a CG trailer for Castlevania: Lords of Shadow 2 which I’m not at all excited about. There’s a brief tease for the 3DS Castlevania that leaked out weeks ago which will be officially revealed on June 5th at E3 proper.

I was pretty bummed there was no new Rhythm Party/DDR/music game news or any mention of Contra that they teased at the end of last year’s show but they do promise more news and reveals throughout E3. You can watch the whole show here (it’s only 32 minutes long) but really the trailers for Zone of the Enders, Revengeance and Lords of Shadows are probably all you’re really interested in and have probably already seen.