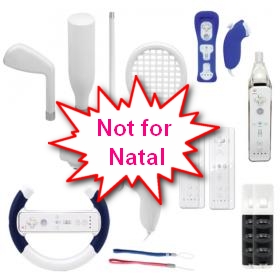 So I’ve been meaning to throw this thought out there for a while and this Joystiq post (by way of MCV) with a couple peripheral maker execs is the perfect impetus to finally get it online. If you’re not familiar with dreamGEAR, they’re the ones behind those silly clamp-on tennis rackets and golf club heads that almost no one bought on the Wii two years ago. Logic3 makes extravagent speaker docks for handhelds and consoles (yes, consoles) as well as plenty of pointless Wii add-ons of their own. MCV called them up to get their thoughts on the ensuing generation of motion controls.

“One of the biggest challenges for peripherals firms is keeping up with changing technology, particularly the trend toward interactive gaming started by Nintendo and now embraced by Microsoft’s Project Natal,” dreamGEAR COO Richard Weston explains to MCV.

“From all the recent revelations at E3 for Xbox 360, PS3 and Wii, motion sensing devices and add-on accessories for these devices will be the main focus in the future,” Logic3’s sales manager Paul Croucher frighteningly foretells.

My big thought on all this is that Natal doesn’t need any accessories. No, not because it’ll be such an engaging and flawless experience that no one will miss holding something physical in their hands. Natal doesn’t need plastic sports sticks (golf, baseball, or otherwise) because everyone already has them. If it’s really as good as we’re led to believe then it doesn’t matter what we’re holding in our hands and a broken broom handle or an ergonomic TV remote will work exactly the same as any mass produced (and overpriced) peripheral. I love the idea of making your own peripherals if you absolutely have to be holding something and I love thinking about the conversations that could arise when talking to co-workers, relatives, and strangers about what they use as a sword, golf club, or gun. You’re gonna look silly no matter how you play with Natal so why not use a dinner plate as a steering wheel or a hair dryer as a ray gun?

You can even go all meta and use a classic Zapper lightgun or maybe even strap on your Guitar Hero guitar and let Natal pick up on the colored buttons and which ones your fingers are covering in order to play. What stuff around your place could you see using for different types of games?